Results for "Third Round" 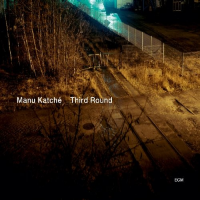 The art of making music that engages both the head and the heart is evidently not hard to pull off, but can be potentially self-defeating. But Manu Katché's exuberant and playful albums set new standards for brainy, soulful, and funky jazz, by blending his strengths as a composer and instrumentalist. His work as a drummer/composer/bandleader, much ...

Drummer Manu Katché's third album as leader on ECM, largely follows suit of his previous two on the legendary German label. A spectacularly inventive drummer, Katché demonstrated on Neighborhood (ECM,2005) and Playground (ECM, 200 7) that he's also a composer of highly attractive tunes, characterized by strong melodies and a gently lilting lyricism, guided by his ...