Results for "The Soul Rebels"

The Soul Rebels are riding high into 2016 after recently touring four continents including Europe, Australia, debuting in China and Japan, selling out shows, collaborating live with artists spanning from Macklemore & Ryan Lewis, Marilyn Manson, Joey Bada$$, Big Freedia, Lettuce, Umphrey’s McGee, Robert Glasper, Kool & The Gang, Rakim, Slick Rick, The String Cheese Incident, Black Thought of The Roots, Pharoahe Monch and opening for Bruno Mars. The Soul Rebels start off the year strong with a tour featuring special guest Talib Kweli, complimented by a three night residency at New York’s Brooklyn Bowl featuring special guests Big Freedia, Talib Kweli and other iconic artists. The Soul Rebels started with an idea – to expand upon the pop music they loved on the radio and the New Orleans brass tradition they grew up on 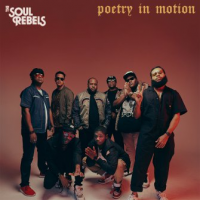 The Soul Rebels is an eight-piece, New Orleans brass ensemble that employs elements of soul, jazz, funk, hip-hop, rock and pop. The group has been described by the Village Voice as “the missing link between Public Enemy and Louis Armstrong." The band aims to provoke. The title of this album derives from a ...

Label: Rounder Records
Released: 2012
Track listing: 504; Sweet Dreams Are Made of This; Turn It Up; My Time; Unlock Your Mind; We Gon’ Take Your Body; Night People; I’m So Confused; Showtime; Say Na Hey; I Made It; Living For the City; Let Your Mind Be Free.

The evolution of the New Orleans brass band continues with each generation and its latest transformation can be heard in Unlock Your Mind by The Soul Rebels. The work of these eight young Crescent City natives is progressive, rhythmic and addictive. It is also highly reflective of their early exposure to New Orleans beats heard in ...

The Soul Rebels trumpet a post-hurricane Katrina sense of optimism and get the party going in full swing on Unlock Your Mind. This New Orleans-based octet implies good cheer via its up-tempo ambiance. Marked by tight horn arrangements, loosely paralleling the likes of Tower of Power or vintage James Brown, the band imparts New Orleans second-line ... 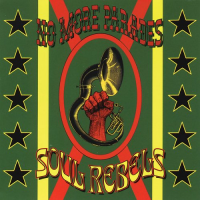 New Orleans-bred Soul Rebels make gumbo music. In their Creole stew they brew hip-hop, funk, jazz, reggae, and second line brass band flavors. Rebelution is only the decade-old ensemble's fourth album, but it shows an incredible maturity and tightness that can only come from habitual live performance. Soul Rebels was formed by former ...

Let Your Mind Be Free 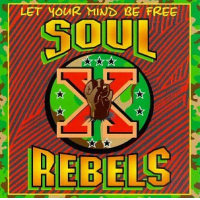