Results for "The High and Mighty Hawk"

The High and Mighty Hawk

Recorded in England in 1958, this little-known session, originally released on the obscure Felsted label, is an inarguable gem. Perhaps even the word “masterpiece" is not too much of a stretch. It's doubtful that the putative “father of the tenor saxophone," Coleman Hawkins, made a better recording in the age of long-playing records, and it's just ...

The High And Mighty Hawk 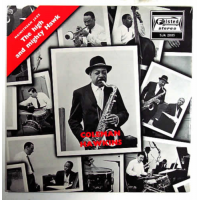