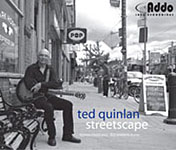 Guitarist Ted Quinlan's diverse musical tastes are reflected on Streetscape, in which he seeks to capture the sound of places like the Danforth in Toronto, Commercial Drive in Vancouver, the Left Bank in Paris and Greenwich Village in New York. Quinlan's wide canvas is well marked, and his approach not only reflects influences that include Wes ...