Steve Holt was a child prodigy starting to play piano at the age of four. Born in Montreal Canada, he began his professional career at the age of seventeen - self-taught - playing the clubs in and around Montreal. Since that time, Steve has built an international reputation as one of Canada's premier Jazz pianists, having worked with, among others, Archie Shepp, Larry Coryell, Eddie Henderson, Pat Labarbera, James Moody, Eddie "Cleanhead" Vinson, and Michel Urbaniak. It was not until the age of twenty- two that Steve began formal music studies; he entered McGill University and graduated with distinction in 1981 as McGill's first-ever Bachelor of Music majoring in Jazz performance

The Doctor Is Out

Len Dobbin was a cool jazz voice on the radio when I was a teenager just getting into playing jazz. In fact, my love affair with jazz began in the 1970s when I discovered the album Headhunters by Herbie Hancock in 1973. Up to that point I had been playing pop and folk music, like most ...

Charlie Biddle--even the name sounds like show biz. But it didn't take long for that name to become a pseudonym for Montreal jazz. I guess it helps to a club named after you.When anyone talked of Montreal jazz, Charlie's name always came up. Truly he was one of those larger-than-life figures. Not only did ... 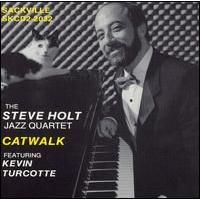