Results for "Smack Up" 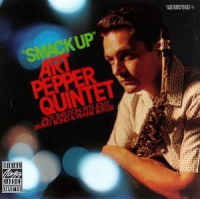 Art Pepper's reckless lifestyle tended to overshadow his superb musicianship, and the circumstances surrounding Smack Up are certainly no exception. Shortly after recording it in 1960, he spent three years in jail for heroin possession, and one can only wonder if the title of the record is a play on words. Nevertheless, Pepper is in good ...

Art Pepper produced the greatest recordings of the so-called “first phase" of his career during periods of intense chaos. A case in point is Art Pepper Meets the Rhythm Section, where the altoist--rusty from inactivity, angry because of the surprise recording session set up by his then-wife Diane, and very, very strung out--expelled an acknowledged masterpiece. ...