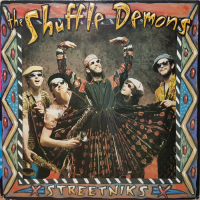 'Crazy Time' is an aptly named wild romp through the fake news and chaos that was 2020. It's the title track from our 2020 CD, one of JazzFM's top 25 of the year! With art direction by long time collaborator Kurt Swinghammer, directed and edited by GFP, and shot at GS209 studio, this video comes with everything you'd expect from the Shuffle Demons: great music, humour and sarcastic social commentary. Featuring compelling musical and acting performances by drummer Stich Wynston, bassist Mike Downes and saxophonists Kelly Jefferson, Matt Lagan and Richard Underhill, 'Crazy Time' stands alongside 'Spadina Bus' and 'Out of my House, Roach' in it's inventiveness and humour. The song was produced, mixed, edited and mastered by the amazing Jono Grant at Victory Drive Music and recorded by Jeremy Darby at Canterbury Music Company. Just one of 10 great sounding songs on the CD! We'd like to thank the Toronto Arts Council and Factor for their generous support in making this record.
Album