Born and raised in Kyoto, Japan, Shu Odamura is a guitarist and composer based in New York City. During his years at Berklee College of Music, he started focusing on finger style on nylon string guitar and developed what became his signature voice. Shu released his debut album “Cloud Illusions” from What’s New Records in 2015 and the album was reviewed in All About Jazz, Minor 7th and Jazz Japan Magazine. While he remains active in the New York Jazz and contemporary music scene, he has worked with theater artists and groups including Watoku Ueno, Group.BR and Opera Pomme Rouge. 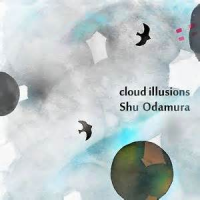 Guitarist/composer Shu Odamura was born in Kyoto, Japan; graduated from the Berklee College of Music; and now lives in New York. He plays this all original set on nylon string guitar (despite the photo with electric guitar in the album liners) in a trio with bassist Yoshiki Yamada and drummer Yutaka Uchida. “Rain" opens the set ...