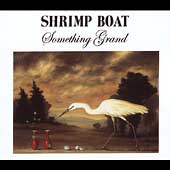 Chances are, unless you noticed AUM Fidelity's recent re-release of the '89 album Speckly, Shrimp Boat may be a mystery to you. The band shone brightly during the late '80s and early '90s on Chicago's art rock scene, before drifting apart in '93. And there they might have stayed, a more or less forgotten footnote in ...

An almost-lost masterpiece of American songwriting, first released in '89 out of Chicago in a limited edition of a thousand vinyl copies, and otherwise unknown and unavailable until this CD edition, Speckly is on the face of it a strange album for AUM Fidelity to release. Not only is it a reissue, but it is in ...