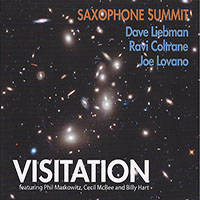 After two recordings for Telarc--2004's Gathering of Spirits, with the late Michael Brecker, and 2008's Seraphic Light, with Ravi Coltrane assuming the position vacated by Brecker following his untimely passing the previous year--Saxophone Summit is back with Visitation. Funded by the (for jazz) early crowd-funding ArtistShare imprint, it demonstrates the difference between recording for a relatively ...