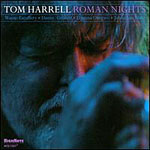 Since signing with the HighNote label in 2006, Tom Harrell has released the most significant CDs in his three decades-plus of recording. It's no coincidence that, for this same period, he has been leading a true dream band of younger players. His previous output for RCA was of the highest quality, particularly Paradise (2001), a unique ...

Since coming back from hiatus following the superb Wise Children (Bluebird, 2003), Tom Harrell's been on a roll. On a new label (HighNote) and with a new working quartet, the trumpeter has gone from success to success, from the undeniably fine Light On (2007), to the even better Prana Dance (2009). Whether Roman Dances is even ...