Drummer and composer Reuben Hoch was born in Brooklyn, New York in 1959. He was raised as an Orthodox Jew, attended Yeshiva, and prayed in the synagogues of various Chassidic Sects, including Munkatch and Satmar. He began playing the drums at the age of 12 and became interested in jazz while in high school. He began playing professionally at the age of 16. By the time he was a senior in high school, Reuben was quite active on the New York jazz scene and recorded with his first group, Repercussions. Heavily influenced by Art Blakey, Tony Williams, Jack DeJohnette and Elvin Jones, by age 19, Reuben was playing with Art Blakey sidemen Valery Ponomaerov, David Schnitter and Lonnie Plaxico

The new edition of Jazz & Blues Florida, Florida's best and only free online source for information on live jazz and blues in clubs, concerts and festivals, is now available. This issue marks four years of being totally online. The issue also offers a special promotional click-through entry for a free drawing for tickets to Steve ...

Please tune in for another great musical performance on WLRN's South Florida Arts Beat on Friday, June 15th, 2012 With REUBEN HOCH AND ADRENALINE JAZZ Are you ready to hear traditional Jewish melodies in a Jam band format? Please join our audience for this swingin’ trio comprised of drummer Reuben Hoch (Greg ... 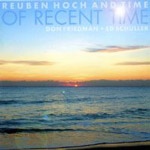 Reuben Hoch's musical career has been a long and winding one. Reared as an orthodox Jew in Brooklyn, the drummer's interest in music was sparked by Chassidic songs, but soon he discovered Art Blakey's Jazz Messengers and the greater jazz discography. He relocated to Tel Aviv, Israel as a medical student, where he was a member ...

Live at the Broward Center for the Performing Arts

Reuben Hoch and The Chassidic Jazz Project: Live at the Broward Center for the Performing Arts

Jewish music and jazz get along well together; they have been doing so for years and are perhaps now closer than ever. Jazz musicians use cantorial modes to further their own improvisational explorations, and musicians playing within a klezmer or Sephardic secular tradition include jazz stylings as part of their overall arrangements. Given all this, it ...

Live at the Broward Center for the Performing Arts

Reuben Hoch and the Chassidic Jazz Project: Live at the Broward Center for the Performing Arts

There is no doubt that Jews have contributed as much to the evolution of jazz as any ethnic group. A short list of great Jewish jazz musicians would include Benny Goodman, Artie Shaw, Stan Getz, Al Cohn, Zoot Sims, and Paul Desmond. Jews have made some great contributions to jazz in other ways as well. Blue ...