Rebecka wrote her first song at the age of 2, recorded by her older sister on a tape-recorder of the days. Has since been singing and playing piano, violin, guitar, and finally made Music her full time life in 2002 by taking on a Masters Degree in Music from Orebro and Malmö University of Music. Upon graduating in 2008, Rebecka moved to the US (Los Angeles, then New York) to pursue her passion for songwriting and performing. She has since been writing, performing, singing, and working as a voice and piano instructor. Rebecka has had the privilege to work with amazing musicians both in Scandinavia and the US, some of them noted here: Charles Altura, Göran Abelli, Tony Austin, Linus Abrahamson, Leonard Axelsson, Gustav Bjarnason, Carl Bagge, Mahesh Balasooryia, Kristian Brink, Brandon Coleman, Chris Coleman, Daniel Collins, Olle Dernevik, Lars Ekman, Hadrien Feraud, Zach Harmon, Johan Liedberg, Erik Lindeborg, JP Maramba, Zane Musa, Nick Mancini, Chris Montgomery, Johannes Nästesjö, Vardan Ovsepian, Hamilton Price, Masa Sasaki, Ruslan Sirota, Daniel Tilling, Max Thornberg, Morten Schantz, and Kamasi Washington. 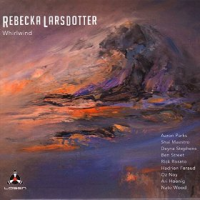 Finding a balance between original material and the great tradition of jazz classics and standards can be difficult as a singer. Sometimes, you end up with albums that merely replicate what has already been said, and other times you encounter music that cuts all ties to tradition and ends up being strangely anonymous. This is not ...

Born and raised in forests of Sweden, Rebecka Larsdotter wrote her first song at the age of 2, recorded by her older sister on a tape-recorder. She has since been writing, singing and playing piano, violin, guitar, and finally made music her full time life in 2002 by beginning a Master's Degree in Music program at ...