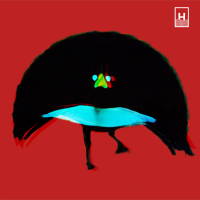 With Pulcino saxophonist Nicoló Ricci bravely sets off on a musical excursion with only bassist Giuseppe Romagnoli and drummer Andreu Pitarch along for the adventure. The result is a fascinating portrait of an artist and players willing to forego the keyboard's harmonic support and cast improvisational fate to their own superior creativity. “The ...

It takes a confident saxophonist to step out in the classic trio format--no chordal instrument or frontline partner to share the load, just a strong trust in one's own skill and the backing of his bandmates. There's no one to hide behind, and everything is out in the figurative spotlight even when all three are sharing ...

I was born in 1987 and I grew up in Sesto San Giovanni, an industrial town in the north of Milan, Italy. I was lucky enough to be brought up in a stimulating and creative family environment and soon I began to show interest towards music. By the age of 12 I received a saxophone as a gift from my mother and I started my studies, first in a local music school and then in the Conservatory G.Verdi of Milan. While still a student I threw myself into the jazz music scene of Milan and I began to perform throughout Italy. During my career, I had the chance to play with great musicians such as: Steve Swallow, Adam Nussbaum, Jesper Bodilsen, Gerald Cannon, Paolino Dalla Porta, Antonio Zambrini, Roberto Gatto, Giovanni Falzone, Andrea Dulbecco, Pietro Tonolo, Tino Tracanna, Marco Vaggi, Achille Succi, Bebo Ferra, Giulio Corini, Alfonso Santimone, Francesco Lento, Harris Eisenstadt, Joe Fonda, Roberto Rossi, Roberto Cecchetto, Fausto Beccalossi, Greg Burk, David Binney, Reinier Baas, Ben Van Gelder, Mark Schilders, Bo van der Werf, Clemens van de Feen