46 years after their previous release, the People Band are putting out a new CD. Paul Jolly is producing the project and releasing it through his record label, 33JAZZ records. Jolly is also a member of the band. He says, “The reason for a new album is that our last one, released on the Emanem label, ...

The People Band and Friends Trbute to Mel Davis Cafe Oto London, England 28th October 2014 I knew when my friend turned to ask me, halfway through the event, “This is a bit extreme isn't it?" that I had baptized him with fire. He had never been to a jazz gig ... 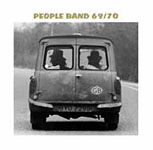 This double-CD is the follow-up to 1968 (Transatlantic, 1970; reissued Emanem, 2004), People Band's only previous album. Where that album featured the band's first generation of players, 69/70 represents its second generation. 69/70 comes after tireless salvage work by Terry Day and Martin Davidson on tapes recorded in a Soho studio, at jam sessions at Mel ...