Born in Austria in 1970, Otmar Binder is a pianist, singer-songwriter and composer, educated at the Vienna Hochschule (between 1978 and 1986) and later at the Vienna Universität für Musik und Darstellende Kunst. He began working as a musician in Vienna in 1988, mainly as an accompanist for singers and actors. Touring work has led him to London, Paris, Rome, Buenos Aires, New York, Los Angeles, Prague, and major cities in Germany and Switzerland and to venues such as, amongst others, the Konzerthaus, Burgtheater, Volkstheater, Theater in der Josefstadt, and Ronacher (all in Vienna). His latest CD might be seen as something of a departure, given the theatrical, piano- pop and chanson repertoire Otmar Binder is usually associated with 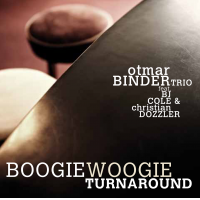 Meet Otmar Binder:I live in Vienna, Austria and work mainly as an theater accompanist. This includes writing film music and songwriting for myself as well as others. As a piano teacher, I focus on songwriting and piano playing for singers and actors.Instrument(s):Piano and vocals.Teachers and/or influences?I ...