“The music will certainly leave the listener with a joyful and playful feeling; Peñas’ focus on making good heartfelt music is a breath of fresh air.” JazzTimes.

Barcelona-born guitarist, arranger, and composer Oscar Peñas was already a widely respected figure on the international jazz scene before settling in New York City a decade ago. Since then, he's genuinely blossomed, creating a singular body of work that weaves together elements of jazz, Spanish folk music, and the European classical tradition. He often works with unorthodox instrumentation, he doesn't blend disparate influences so much as stitch them together with an internal emotional logic

On this show we have a clear demonstration of the variety of fine music that exists across the World of Jazz. There are new releases from Dan Schnelle, Heroes Are Gang Leaders, Oscar Peñas, Majamisty Trio, Sameka, Ronny Graupe Off The Record, Julius Rodriguez plus the trio of John Dikeman, Péter Ajtai, and Nicolas Field.Playlist ...

Music Of Departures And Returns 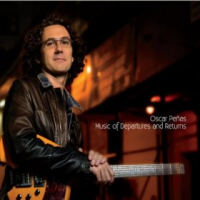 In putting together his fourth album, guitarist Oscar Penas looked to composers he connects with, songs that speak to him, and originals that fit comfortably with the rest. That's the concept here, plain and simple, and the end result is a thirty-eight minute beauty that's alluring and completely accessible. Two different rhythm sections ...

Oscar Peñas: From Now On