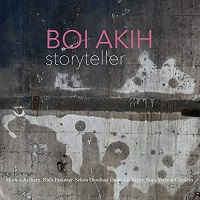 Storyteller is singer Monica Akihary and acoustic guitarist Niels Brouwer's ninth recording since 1997, and their sixth as Boi Akih. No two Boi Akih albums are the same, though Akihary's Indonesian heritage--she often sings in the endangered Haruku language--and Brouwer's jazz-inflected improvisations are common denominators. Over the years the duo has embraced Indian, African and Asian ...

The vibraphone seems to be enjoying something of a renaissance of late, with any number of outstanding exponents of the instrument popping up in all corners of the world. Izabella Effenberg may be a new name for many, but the Polish vibraphonist has already collaborated with the likes of Tony Lakatos, Magnus Ostrom, Nippy Noya and ...