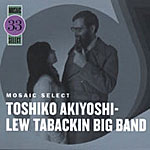 Pianist Toshiko Akiyoshi overcame numerous challenges during her long career, immigrating to a new country, establishing herself as both a top bandleader and composer/arranger, in addition to the difficulties of maintaining a large jazz ensemble. Her husband, tenor saxophonist and flutist Lew Tabackin, was a star soloist in her big band and he helped her recruit ...

Charles Tolliver, who along with Woody Shaw was arguably the last of the trumpet vanguard that defined the instrument's modern approach, often took the road less traveled, forming his own label, Strata-East Records, in the late '60s. This three-CD Mosaic Select release captures Tolliver (along with his familiar musical colleague, pianist Stanley Cowell) in two concert ...

Sidney Bechet was one of the first jazz virtuosos, dominating nearly every recording session in which he took part. Though his Blue Note and RCA Victor recordings are better known due to frequent reissues, there is a lot of rare, valuable material here. This limited-edition compilation collects many of his recordings (plus fourteen previously unissued selections) ...