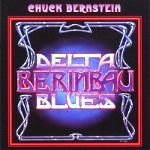 It's good when it's possible to step out of a comfort zone to appreciate (if not love) unfamiliar styles. The same can be said of artists who break from instruments they're known for. Chuck Bernstein goes one further with Delta Berimbau Blues.Bernstein is a versatile drummer, but for this project, he employs the berimbau, ... 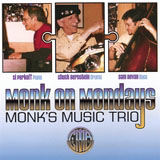 Drummer Chuck Bernstein, pianist Si Perkoff and bassist Sam Bevan --collectively known as Monk's Music Trio--have been playing the music of Thelonious Monk at the Simple Pleasures Café in San Francisco on Monday nights since 1999. That makes them the longest of the repertory bands performing Monk's music. Time has also given them an insight into ...

The music of Thelonious Monk has been constructed, reconstructed and deconstructed over the years. Some players have tried to ape him, which is quite natural, but not necessarily successful. Others have filtered his music through their own prisms and have succeeded in introducing different constructs.Among the latter group are Chuck Bernstein, Si Perkoff, and ...

Except for a surrealistic version of “Friday The 13th, Monk's Bones offers straightforward interpretations of nine Thelonious Monk compositions. The third recording by Monk's Music Trio adds the trombones of Roswell Rudd, a longtime exponent of Monk's work, and Max Perkoff, the son of the band's pianist, Si Perkoff. All of the tracks profit from the ...

Think of One: A swinging trio with two outrageous trombones. If you're wondering whether this is just another Thelonious Monk tribute, think again, because the Monk's Music Trio ups the ante in every way, continuing to creatively explore the music of one of jazz's most celebrated pianists. Monk's Bones is the trio's third release, following Harmony ...