Concord Records recording artist and 2005 double-Grammy nominee Monica Mancini, daughter of famed film composer Henry Mancini and the notable studio singer Ginny O’Conner Mancini, has carved out an impressive career as a concert performer, appearing with major symphony orchestras worldwide, including the Chicago Symphony, New York Pops, Boston Pops, Dallas Symphony, Seattle Symphony and the London Metropolitan Orchestra. She began singing early on as a member of the Henry Mancini Chorus, which led to a successful career in the Los Angeles studios, where she appeared on countless film scores and recordings, with such notable artists as Placido Domingo, Quincy Jones, and Michael Jackson

Ella 100 Live at the Apollo

By The Count Basie Orchestra

Label: Concord Jazz
Released: 2020
Track listing: Judy; Opening Remarks; A Ticket-A Basket; When I Get Low I Get High; Ain't Misbehavin'; Do Nothin' Till You Hear From Me; Love You Madly; The Nearness of You; Oh, Lady Be Good; How High is the Moon; Back to the Apollo; I Loves You Porgy/There's A Boat Dat's Leavin' Soon For NY; Cry Me A River; Honeysuckle Rose; Once In A While; You'll Have To Swing It Mr. Paganini)/Paganini Bows Reprise; People

To be taken back in time within the scope of a period piece movie has long been a staple. Some journeys feel much more real than others, but the concept is commonplace. Venturing into the past with only the audio of a CD or record is, as they might have said back in 1934, “a whole ...

Gershwin Reimagined: An American in London 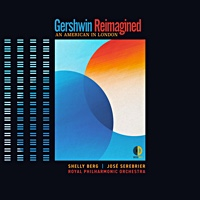 Sadness naturally hovers like a black cloud over life's December days, but hope and joy can often find a way to peak through the overcast skies. That's a message that comes through most clearly on Jimmy Scott's beautiful parting gift to the world. I Go Back Home manages to serve as swan song, ...

Jimmy Scott: I Go Back Home Kemper Music, Sine Qua Non Music 2016 “Little" Jimmy Scott (1925-2014) was for a long time the world's greatest jazz singer nobody ever heard of. Enormously talented, with an intuitive grasp of the jazz idiom and the blues, he began his ascendance as a singer with ...

Lorraine Feather: I Love You Guys

The great pianist and composer, Thelonious Monk, is credited with the remark that “writing about jazz is like dancing about architecture." But don't dash off and try to authenticate the quote. One, it'll just take you down a rabbit hole, and two, whether or not he ever actually uttered those words doesn't really matter. Because far ... 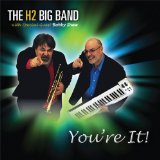 The H2 Big BandYou're It!Jazzed Media2010 Big-band album of the year? There have been a number of worthy aspirants in the first half of 2011, and now comes another strong contender: the Denver-based H2 Big Band, whose debut recording, You're It!, is a paragon of straight-ahead blowing pleasure ...