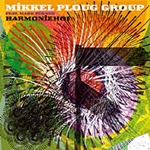 Mikkel Ploug has been slowly, but surely, building a reputation for himself, and deservedly so. His live performances speak for themselves. This recording opens the door to his skills as a composer even while showcasing his considerable talent as a guitarist. Ploug's writing has depth. His ear for melody is astute and he brings in different ...

Jordi Pujol keeps finding talented newcomers and gives them a chance to record. Guitarist Mikkel Ploug (Peterson) is truly deserving of such an opportunity since he has an original voice with something to say. The trailer to the title Mikkel Ploug Group is Featuring Mark Turner and the album is very much an ...

With recent appearances at the North Sea Jazz Festival and other more intimate venues, guitarist Mikkel Ploug's star has been ascending--not only in his native Denmark, but also in various overlapping international jazz circles. Last year, he received his BTA with a two-month residency in New York City, and in the process made some interesting musical ...