Guitarist Mike Fageros first started playing guitar at age 13 and studied under the tutilage of Alan Massey who was a local guitar teacher where he was born and raised in Georgetown in Washington, D.C.. After learning the basics, he was then teaching guitar at Alan Massey studios a year later. At age 15 he was able to meet and later study with Roy Buchannan as Roy played at a local venue in Georgetown called the Silver Dollar. Moving to Baltimore at age 16, he took up residence at one of the most reknown jazz clubs in the area, Bluesette, which was owned and managed by the legendary Art Peyton. Once there, he formed a group known as "Rise" which performed side by side at Bluesette with a group known as "Urch Perch" which has achieved legendary status as a cult group in the Baltimore area

Guitarist Mike Fageros has released his new CD entitled “Melange de Jazz" on the Top Secret label. This CD features the guitarist in the Organ Trio setting utilizing two different Hammond Organists and featuring them on different tracks. Organist Robert Sanders is featured on 6 cuts including Minority and Recorda Me and Organist Travis Doyle is ... 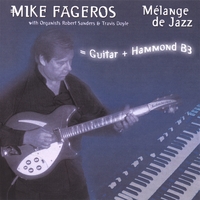