Mark Mosley was only 11 years old when he first picked up the guitar. That one single act put him on the road of a lifelong musical adventure that would allow him to discover a deep love of many different styles of music. The Blues first lit his soul - particularly the styles of B.B. King, Freddie King and Albert Collins; and then it was jazz that caught his attention! During a high school band trip to perform at the Montreux Jazz Festival in Switzerland, he became mesmerized after seeing a live performance from Oscar Peterson, Rahsaan Roland Kirk, Les McCann, Eddie Harris, and David “Fathead” Newman 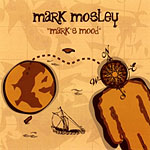 Mark's Mood is a blues-driven, bop-based release from Washington, D.C. based guitarist Mark Mosley. The disc, released as a six-song EP, provides an anticipatory glimpse into the musical musings of the bebop-oriented guitarist. Laced in blues-based vocabulary, reminiscent of the late, great Wes Montgomery, Mosley and company are never afraid to take chances, often stepping out ...