Ornette Coleman's Reflections on "This Is Our Music"

Ornette Coleman Royal Festival Hall London June 21, 2009 Like the equally successful All Tomorrow's Parties festivals, London's Meltdown--now in its 16th year--leaves the artist selection process in the hands of a guest curator. Though past candidates have included such phenomenally original artists as Massive Attack and David Bowie, asking ...

Marc Ribot / Evan Parker / Han Bennink Queen Elizabeth Hall London, England June 14, 2009 The Moment's Energy, a new ECM release from Evan Parker, may be a slight disappointment from an artist who has been acclaimed by some as the heir apparent to John Coltrane. Yet this appearance, ... 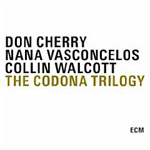 The three musicians who comprised CODONA are relatively well known, trumpeter Don Cherry in particular. Yet the group he formed with sitar and tabla player Collin Walcott and percussionist Nana Vasconcelos--hence CODONA--has been mysteriously neglected. Despite recording three superb albums for ECM between 1978 and 1982, CODONA remains perhaps one of the label's most underrated acts. ...

They formed, of course, in the American city that constitutes part of their band moniker. But this 1970 album by the Art Ensemble Of Chicago, re-released on Soul Jazz, was in fact recorded in Paris, the four main AEOC members having formed part of the late '60s exodus that also brought to France Archie Shepp, Don ...

A London Jazz Festival 2008Punkt King's Place, London November 22, 2008 Listen to Norway's Sidsel Endresen on record and one assumes all manner of studio trickery: surely her voice is being cut up, reversed, electronically warped? Yet as made clear by the bare stage show that opens tonight's proceedings, ...

Mopomoso featuring Evan Parker Trio at The Vortex in London

Evan Parker TrioThe Vortex Jazz clubLondon, EnglandNovember 16, 2008 Fair enough, it's billed as “Mopomoso featuring Evan Parker Trio." But still, a five-hour bill culminating in less than twenty minutes from the man himself would try the stamina of all but the most committed free improv devotees. Thankfully, with ...

Bugge WesseltoftLondon Jazz Festival 2008King's PlaceLondon, EnglandNovember 15, 2008 Having attended the Peter Brotzmann gig earlier the same night, I arrived at Bugge Wesseltoft's show a little late. It's a surprise to see the Norwegian--best known for the embrace of electronics in so-called nu-jazz, or what he terms his ...

Peter BrotzmannLondon Jazz Festival 2008Purcell RoomLondon, EnglandNovember 15, 2008 Peter Brotzmann must have one of the most undeviatingly linear careers in modern jazz. A full 40 years after his landmark Machine Gun album and fast approaching 70 years of age, the German multi- reedist is still best known for ...

Arve HenriksenLondon Jazz Festival 2008Kings Place, LondonNovember 14, 2008The solo violin piece from Charles Mutter and the improvised duet between trumpeter Arve Henriksen and live samplist Jan Bang both have their moments, while John Orford's (intentionally?) hilarious distorted bassoon solo wins almost the biggest cheer of the night. Yet the highlights ...

She may have won this year's BBC Jazz Award for best vocalist, yet Christine Tobin was not, ostensibly at least, the main attraction in Radioplay, which just completed its October, 2008 run at London's Lyric theatre following an earlier incarnation at the Vortex last year. Rather, with guitarist Phil Robson and bassist Dave Whitford, her job ...