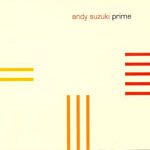 Throughout his career, pianist Nick Manson has appeared in a wide variety of musical settings. He played in Lenny Kravitz's band in the early 80s, wrote Emmy-winning themes for television, and also composed a large oeuvre of commercial music. With Mercator, he returns to the jazz he grew up with, playing original compositions in a quartet ...

In Loving Memory To Roby Duke

You'd think the job of making a successful jazz CD would be hard enough without imposing restrictions on the process. The restriction that saxophonist Andy Suzuki has tackled on Prime is prime numbers--and refresher for those who have forgotten their math studies, a prime number is one those that can be divided only by itself and ...