Lorenzo Sanguedolce is a Brooklyn based tenor saxophonist and improviser whose music is not defined by genre or style. His debut album, "Live at the Yippie", with bassist Michael Bisio, was released on NoBusiness Records in November 2009. He leads numerous small groups, including a quartet with David Arner (p), Francois Grillot (b) and Todd Capp (d), a trio with Adam Caine and John Wagner, and other projects including alto saxophonist Nick Lyons and bassist Adam Lane. Lorenzo is a member of the New York Soundpainting Orchestra and Eric Eigner’s Mysterium Electric Soundpainting Septet

Live At The Yippie

Lorenzo Sanguedolce and Michael Bisio: Live at the Yippie (LP) 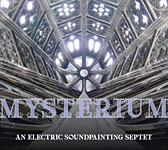 This reviewer heard drummer Eric John Eigner's Mysterium project around five years ago, about the same time as picking up on guitarist Adam Cai's Pipe (TrueFalse, 2005). Both these trio releases were thrill-rides that aurally assaulted with an instrumental and compositional mix that leaned heavily on their respective leaders. Their playing field was bounded by a ...