LENA SEIKALY is a fresh voice on the national jazz scene from Washington, D.C. Named “one of Washington’s preeminent jazz singers” and “brightest voices in jazz” (The Washington Post), as well as a “major league young talent in jazz” by Duke Ellington’s biographer, Dr. John Hasse, Lena is already making her mark as both a revivalist of traditional jazz vocals, as well as an innovator in contemporary vocal jazz styles. Originally from Falls Church, Virginia, she began her training at age four with piano, continued with classical voice in her teens, and went on to complete a B.M

Lena Seikaly at the Attucks Theater

Lena Seikaly is not a household name... yet! The jny:Washington D.C. native has been called one of the “brightest voices in jazz" and her new fans at the sold out Attucks Theatre performance could not agree more. Classically trained as an operatic mezzo-soprano her phrasing, intonation, and full bodied tone is reminiscent of Ella Fitzgerald. She ... 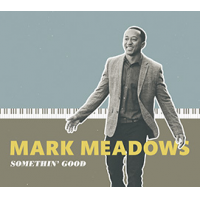 Mark Meadows is a multifaceted jazz pianist, composer and jazz educator. Besides regularly performing across the U.S, Meadows also teaches four courses as an adjunct instructor at the Duke Ellington School of the Arts in Washington, D.C. During the 2014-2015 season, Meadows is appearing alongside world-renowned musicians such as: Warren Wolf, Cyrus Chestnut, Dontae Winslow, Kris ...

Guitarist Sheryl Bailey and singer Lena Seikaly will headline the second annual Mel Bay Jazz Festival, which will take place Thursday, September 25 through Saturday, September 27 at four different venues in and around De Soto, MO. The NYC-based Bailey is a Berklee School of Music graduate who has released eight albums as a leader, the ...

Jazz is Bustin' Out All Over the Nation's Capital

The DC Jazz Festival (DCJF) today announced its signature programs for 2012, which include: Jazz Meets the Classics at the Kennedy Center; Jazz in the 'Hoods presented by Events DC; Jazz ‘n' Families Fun Days at The Phillips Collection; Jazz at the Hamilton presented by The Washington Post; and Jazz at the Howard. The Festival will ...

As the Alps tower over Swiss villages, stacks of compact discs tower over me. Sampling, auditioning, listening at length when something grabs my ear, I make my way through the CD Alps that surround me. If I live to be 115, which is my plan, there is no possibility of my fully hearing more than a ...

Lena Seikaly debut album, Written in the Stars, is finally available for sale! The album contains six re-created jazz standards, including “East of the Sun (and West of the Moon)," “When I Fall in Love," “The Very Thought of You," “You Go to My Head" and others, as well as four original compositions, including the title ...