Kevin Hart is a jazz vibraphonist, pianist and drummer from Central Illinois. His stylistically eclectic The Road to Everywhere was chosen as a 2005 recommended release by Laura Kennedy from WGLT who says, “Kevin Hart is a masterful musician—a generous artist with style, class and a forever sense of fun. His originals sparkle with innovation and cosmopolitan charm and as Axel F demonstrates, his choice of cover material reveals imagination and vision.” Latin-flavored Corazón was also a 2010 top ten pick by KXLU in Los Angeles. Early on, Kevin played his father’s drums to jazz records, studied piano as required by his mother, imitated Lionel Hampton on an older sister’s vibraphone, and began drumming with local pros at 15

The Road To Everywhere 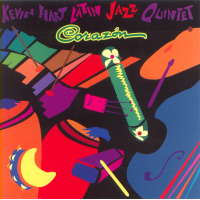