Album producer/coproducer, Karen also wrote, composed or arranged her eight CD titles under her label URSH Records since its inception in 1992, among which Canticum Canticorum - a specialized Medieval / Mediterranean / Jazz Fusion CD than sold almost 10,000 to date in Québec only.

Conductor, leader and musical director to most of her live performances since the 1970's, Karen YOUNG likes to learn and perform music in all/most its different genres: Jazz, Latin, Cuban, Mediterraneen, Early Music, and the list grows 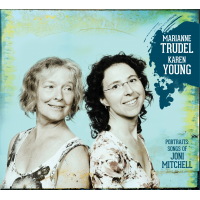