Guitarist and composer Justin Morell received his BA from UCLA, an MA from California State University East Bay, and his Ph.D. from the University of Oregon where he studied under Robert Kyr and David Crumb. While his main interests are composition and jazz performance, he is an experienced guitarist of all styles. Justin comes from a family of musicians: His father, John, is a jazz guitarist who has worked with noted artists from Shelly Manne to Miles Davis, and his grandfather, Carl Fischer, composed such standards as “You’ve Changed” and “We’ll Be Together Again.” Justin grew up in Los Angeles and got his start as a professional musician there where he worked with a number of notable jazz and studio musicians 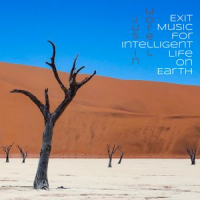 Guitarist Justin Morell thinks big. His concept for writing the compositions for All Without Words: Variations Inspired By Loren (Tiger Turn, 2021), from the John Daversa Jazz Orchestra Featuring Justin Morell, came to being via his experiences in raising his autistic son. Now, his Exit Music For Intelligent Life On Earth explores the challenges concerning climate ...

Guitarist and composer Justin Morell is releasing his newest album, Exit Music for Intelligent Life on Earth, a collection of twenty-one short works for multiple guitars and drums. This is the follow-up to the much acclaimed All Without Words: Variations Inspired by Loren (2021) by the John Daversa Jazz Orchestra featuring Justin Morell, on which Morell ...

Label: Tiger Turn
Released: 2021
Track listing: Loren's Theme; Searching But Never Finding; Two Steps Forward; Seeing It Again For The First Time; The Urgency Of Every Moment; Invisible Things; Walking In Our Own Footsteps/The Circle Game; The Smallest Thing; A Day Is Forever/Like Any Other; Three Roads Diverged; Learning What It Means To Be; It's Enough To Be Here, Now.

Music can be inspired by many things, such as romantic affection, personal experience, world events and social concerns among many others. This extraordinary piece of music was inspired by a parent's love for a child. Trumpeter John Daversa asked his friend, composer Justin Morell, to write a large-scale orchestral piece for him. Morell came ...

Justin Morell, himself a world-class guitarist, does not play guitar (or anything else) on this splendid new album, which, even so, could not have taken flight without him. Morell, an assistant professor of music at Lebanon Valley College in Pennsylvania, composed and arranged the inclusive three-movement Concerto for Guitar and Jazz Orchestra, performed in his stead ...

Guitarist/composer Justin Morell has recorded six albums as a leader, and written several ensemble pieces that featured guitar parts. He found that he enjoyed exploring the guitar's capabilities, so the Concerto was created to focus on the guitar as solo instrument accompanied by a large ensemble in the classical concerto tradition. He joined with his lifelong ...

Concerto for Guitar and Jazz Orchestra