Smalls Jazz Club in Greenwich Village is a remarkably vibrant music venue that enjoys considerable international renown. It is not the most mannered of clubs with loud and boisterous audiences. Nor is it the most decorous, but does offer a rather distinctive look. The club has a great vibe and is committed to treating its audience ... 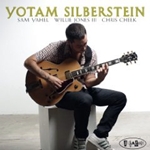 Yotam Silberstein began playing guitar when he was 10. His first interests were rock and pop, but five years later he began studying jazz. After he finished high school in Tel Aviv, Silberstein moved to New York City. He continued pursuing jazz and, over the years, has played with Kenny Barron, Avishai Cohen, Roy Hargrove and ...