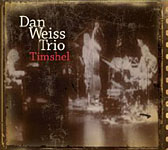 First gaining recognition with Indo-Pakistani guitarist Rez Abbasi, Dan Weiss has enjoyed a successful last few years. In addition to working with guitarist Joel Harrison, and saxophonists Rudresh Mahanthappa and David Binney, the debut of his now five year-old piano trio, No Yes When (Tone of a Pitch, 2006), was as uncompromising as anything released that ...

Guitarist/composer/arranger Chris Jentsch has produced a highly original forty-five minute work in the titular Brooklyn Suite, as well as two other new compositions. Jentsch has lived in the New York borough of Brooklyn since 1999 and pays homage to the sights and sounds of his adopted home. Jentsch did the same for another city on Miami ...

A resurgence and appreciation of large ensemble jazz suites is on the rise, as witnessed in the acclaim attending recordings such as the Maria Schneider Orchestra's Grammy nominated Sky Blue(ArtistShare,2007). But while scores for larger collectives are not unusual, it is less common to find them centered on orchestra and guitar. Enter Brooklyn ...

It's nice to see that some of that grant-money floating around out there is being put to good use. Such is the case with guitarist Chris Jentsch's Brooklyn Suite, a 2005 live recording of a complex-yet-highly rewarding suite for 18-piece ensemble. Underwritten by the American Composers Forum and the Jerome Foundation, the project takes full advantage ...