an Maksimowicz (b. 1975) is one of the most exciting Lithuanian jazz saxophonists, praised for his emotional and consummate musicianship, admired as a master of stylistic interplay, ingenious composer, band leader and teacher. Jan Maksimowicz studied at the Balys Dvarionas School of Music, the Vilnius Conservatory, and received Master's Degree from the Lithuanian Academy of Music and Theatre (under Petras Vyšniauskas). He participated and earned prizes in a number of competitions: laureate of Juozas Pakalnis Competition (1994), Grand Prix and audience prize in Lithuania's Saxophone Competition in Klaipėda (1999), third prize in the International Saxophone Competition "Brilliant Note" in Latvia (2000), and first prize in the International Young Jazz Performers Competition in Klaipėda (2000). Since his jazz debut in 1996, Jan Maksimowicz has collaborated with a number of Lithuanian jazz celebrities, including Vytautas Labutis, Petras Vyšniauskas, Oleg Molokoyedov, Dainius Pulauskas, Artūras Anusauskas, Saulius Šiaučiulis, Eugenijus Kanevičius, Danielius Praspaliauskis, Valerijus Ramoška, Liudas Mockūnas, Vytis Nivinskas, Arūnas Šlaustas, Arkady Gotesman, and appeared in international projects, including Anatoly Vapirov's Mirror of Memory and Baltic Asteroids. Jan Maksimowicz made his debut as a leader and composer in 2002 and since then has mostly performed with his own groups: trio, quartet, and quintet Riot. The saxophonist performs as a soloist as well, takes part in various projects collaborating not only with jazz musicians, but also with classical performers such as Polish Chamber Orchestra (leader Zbigniew Lewicki), organist Vitaly Neugasimov, and Čiurlionis String Quartet

Thousand Seconds Of Our Lives 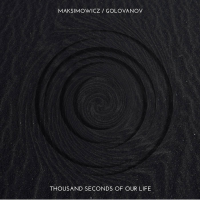 Saxophonist Jan Maksimowicz and pianist Dmitrij Golovanov, two of the Lithuanian jazz scene's younger generation, combine on Thousand Seconds Of Our Life, which seems to be the name of their project as well as this album. While they may not have high profiles outside of their home country, both have a number of domestic releases under ...