Label: Next Level
Released: 2020
Track listing: What I'll Find, Swimming, It May Not Always Be So, Same Song, Ask, Hide and Seek, Careful Construction, Caution, The Architects, Holding Pattern

Jamie Reynolds is a Canadian pianist, keyboardist and composer who has lived in New York City since 2005. He graduated with honors from the University of Toronto in 2004, where he studied with David Braid, Mike Murley, Phil Nimmons, and many others. Jamie moved to New York in 2005 when he was awarded multiple Canada Council grants to study privately with Fred Hersch and Craig Taborn. He has also received professional development grants for touring in 2012 and for recording his album Counterpart in 2013. Jamie has performed at New York's top jazz clubs and has toured extensively in Canada, the U.S., and Europe, including a performance at the Newport Jazz Festival

New York-based pianist Jamie Reynolds set himself up with the challenge of conveying the realities of certain emotions musically. The result is Grey Mirror, a piano trio enhanced by the contributions of guitarist Matthew Stevens and The Westerlies, a two trumpet, two trombone quartet. Reynolds proves himself a fine conceptualist, with some tunes featuring ... 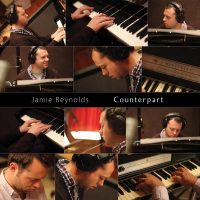