Emerging from the tragic bankruptcy of Stiff Records, James Taylor, founding member of the infamous group The Prisoners - formed The James Taylor Quartet JTQ's first single, Blow Up, was released on the Re Elect The President (Acid Jazz) label in 1985. It was a huge success, immediately attracting the attention of John Peel who championed it; the track appearing three years running on Peel's seminal Festive 50 Chart. After an impressive 13 weeks in the Indie Singles Chart, the band decided to start work on a mini album, titled Mission Impossible. This debut, released in '86, was naturally featured around Taylor's Hammond organ sound to produce classic covers of Sixties film themes Mission Impossible, Goldfinger, Mrs Robinson and other heavily grooving instrumental punk funk tunes 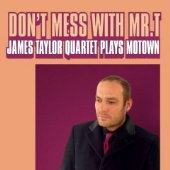 Label: Dome Records
Released: 2007
Track listing: Money (That's What I Want); Got To Give It Up; Signed, Sealed, Delivered (I'm Yours); Function At The Junction; After The Dance (ft. Omar); Jimmy Mack; Machine Gun; Come See About Me (ft. Donna Gardier); Cleo's Mood; You Beat Me To The Punch (ft. Hil St Soul); You're All I Need To Get By; Don't Mess With Mr. T.

James Taylor's vintage Hammond-led outfit has consistently delighted lovers of jazz, funk and R&B in equal measure over the last twenty years. The group is most famous for its signature tune, the “Theme From Starsky and Hutch, but this album shows greater variety than the standard jam workout. Don't Mess With Mr. T: James Taylor Quartet ...

James Taylor Quartet The First Sixty Four Minutes Re-elect The President/Acid Jazz 1988 Though virtually unknown in North America, the James Taylor Quartet has been a cult phenomenon in the UK for the past twenty years. The group began by revitalizing the great soul jazz of Blue Note's ...

A better title for U.K. organist / keyboardist James Taylor's fourth disc might be “ re creation." That goes for reincarnation and pure fun too. The giveaway is in the cover photo's pun of the famous shot from the 1966 mod film, Blow Up (itself highlighting some of Herbie Hancock's earliest dope jazz). Creation is pure ...