Considered one of the finest singers of the golden age of jazz, Ivie Anderson was a fluent vocalist who impressed many with her blues and scat phrasings. Most impressed was Duke Ellington, who kept her on as vocalist for eleven years and is thought to be the best singer he ever had. Born in California, young Ivie received vocal training at her local St. Mary's Convent and later spent two years studying with Sara Ritt in Washington, DC. Returning home she found work with Curtis Mosby, Paul Howard, Sonny Clay, and briefly with Anson Weeks at the Mark Hopkins Hotel in Los Angeles. She also found work in vaudeville, touring the country as a dancer and vocalist in the Fanchon and Marco revue, starring Mamie Smith, and with the Shuffle Along revue

Like Mildred Bailey, Ivie Anderson was an early female vocalist who pioneered the jazz idiom in dance bands. She joined Duke Ellington's orchestra in 1931and for the next 12 years she toured and recorded with the band. Anderson's voice was more pointed and huskier than Bailey's and featured a mild tremolo. She also had a slinkier ...

This week on Riverwalk Jazz, Catherine Russell joins The Jim Cullum Jazz Band with frequent guest artist Dick Hyman on piano, at the historic Pearl Stable in San Antonio. They present a selection of songs from Catherine's recent CDs. Catherine talks about her beginnings as the daughter of a pioneering woman of jazz, to what she ...

Christian McBride was talking about the Grammy he received in October, 2011 for his big band album, The Good Feeling (Mack Avenue, 2011)--his first Grammy as a leader and third overall. While the bassist certainly appreciated getting the nod from his peers and from the Recording Academy, he said he gets just as much of a ...

Girl Singers of the Swing Era on Riverwalk Jazz This Week 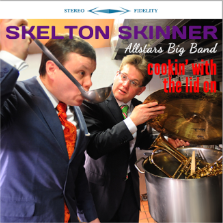