“My greatest inspiration as a child came from my father's old record collection stored in a box in the fruit cellar. I listened to the music of Ella Fitzgerald, Billie Holiday, Frank Sinatra, Peggy Lee and popular singers like Petula Clark and Dusty Springfield. All of the greats". While attending the University of Toronto, Irene Atman began her career as a jazz singer as the lead vocalist with the Stan Hiltz Orchestra. "One of the greatest things about singing with this big band was that some of the best musicians in the world would sub in - greats like Moe Koffman on flute and sax." "I learned a lot from just listening to these guys." Soon after, as word traveled quickly through the jazz community, Irene was invited to perform with other jazz luminaries like the Boss Brass, Guido Basso and Oscar Peterson alumni, Dave Young and Terry Clarke 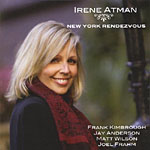 Label: Self Produced
Released: 2009
Track listing: Two for the Road; Taking a Chance on Love; Why Did I Choose You; Somo Novios; Time After Time; I'm a Fool to Want You; Charade; A Time for Love; Alfie; The Glory of Love.

Every once in a while, a fresh voice comes along that's worthy of notice. Or, in the case of Irene Atman, it's an experienced voice with a fresh interpretation of classics. When other children wanted to hear bedtime stories or have parents sing them to sleep, Atman sang to herself. By the age ...

Vocalist Irene Atman Performs at the Kitano on June 3rd, 2009 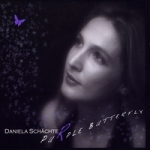 Nowhere in jazz is the soil so rich as it is in the area of female vocals. Major label, independents, melting pots and old school, there are vocal releases appealing to any persnickety taste. Such a diverse marketplace is to the fortune of the listening public. This fortune is magnified when two dramatically different singers share ...

Irene AtmanSlide BarSydney, AustraliaApril 15, 2008Slide Bar, Oxford Street is a difficult venue for a jazz vocalist. Blessed with a hi- tech sound system but hindered by a somewhat small and an almost too close stage to audience set up , it is a venue that for the inexperienced could prove ...

ITake the sassiness of Anita O'Day, mix in the note-perfect purity of Lee Wiley, add a cup of Doris Day sunniness and stir in some Dianne Reeves soul. Cook well. That's the recipe for one utterly delightful jazz singer and it's not a made-up formula. Canada's Irene Atman has emerged from the Dizzy's Jazz Club oven ...