Results for "In Session" 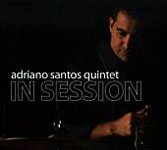 Adriano Santos of Sao Paulo, Brasil is a drummer and percussionist currently on the faculty of the Drummers Collective school in New York whose drumming style has been compared to that of Airto Moreira. Residing in New York since the mid '90s and a fixture in the area's vibrant jazz scene, Santos puts his slant on ...

To say that everybody loves Brazilian music would be too general. But clearly, the sound has a mystique, as so many have embraced it. Percussionist Adriano Santos revisits the music of several Brazilian composers with In Session. Santos grew up in Sao Paulo and began study at the Zimbo Trio Music School at the ...

Drummer Adriano Santos brings the rhythms of Brazil to the Big Apple when he performs. Santos, originally from São Paulo, has been an essential part of the jazz scene in New York since he moved there in 1995. His crisp, authentic and creative grooves have made him a first call drummer for Hendrik Meurkens, Vinicius Cantuaria, ...

In 1983, blues legend Albert King scheduled a TV appearance on In Session, a program produced by CHCH-TV in Hamilton, Ontario. The show matched like-minded musicians in hour-long jam sessions. In advance of the show, the 60-year-old King was only told that he’d be jamming with another guitarist. His collaborator turned out to be 29-year-old Stevie ...