Born in 1955 in Philadelphia, PA, Ian Dogole began his musical journey at age four, studying piano and then switched to guitar at age seven. After growing up on soul and rock music, Ian discovered Jazz, especially Miles Davis, John Coltrane, Yusef Lateef and Sun Ra (among many), and their influences remain strong to this date. In high school outside of Philadelphia, Ian was exposed to Chinese and Indian classical music by his instructor, Roman Pawlowski. This was the point in which Ian's passion for Jazz and his newfound love of "World" music intersected. As a major in Ethnomusicology (and Classics) at Brown University, Ian delved more deeply into the indigenous music cultures of the planet, while maintaining his fascination with the evolution of Jazz 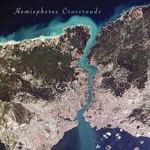 Ian Dogole is a percussionist of considerable skill, character, invention and individuality. This ensemble that he has put together--Hemispheres--might otherwise be passed over as just another world fusion group. It is also graced by multi-reed artist Paul McCandless, who just happens to be co-founder of the legendary band, Oregon. The uniqueness of Crossroads is further evidence ...