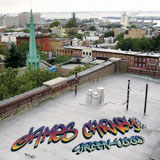 James Carney cites a long and varied line of influences on his music that includes Henry Threadgill, Keith Emerson, Steve Reich and Bill Monroe. That's an eclectic mix, and all have a certain bearing on his compositions. Carney, who won the 1999 Thelonious Monk International Jazz Composers Award, composes music in his head and then writes ...

Keyboardist and composer James Carney might be described as a friendly iconoclast, an artist who enthusiastically explores new concepts at the cutting edge of jazz and welcomes listeners to share what he's discovered instead of daring them to keep up. The borough of Brooklyn is the inspiration for Carney's Green-Wood, where he joins some old friends ...