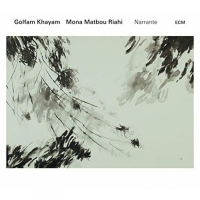 Iranian guitarist Golfam Khayam and clarinetist Mona Matbou Riahi--also known as the Naqsh Duo--bring a whole host of additional influences to bear on the Persian musical traditions they grew up with in the collaborative music on Narrante. Khayam explains that “the freshness and purpose of improvisation come mostly from the Persian side, while the careful structure ...