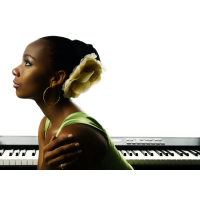 Stanley Jordan's breakthrough recording, Magic Touch (Blue Note, 1985), was aptly named; the guitarist's two-handed tapping technique seemed to be achieved through sorcery rather than practice. People had used tapping before, but never to the level that Jordan did--comping and soloing at the same time, and giving the illusions of two guitarists playing at once. Those ...

In a successful career of over 25 years, guitarist Stanley Jordan has always displayed his versatility--equally adept at blues, straight-ahead jazz and ever inventive with classical masterpieces. His virtuosity and improvisational prowess are a given, and on Friends, he also shows his skill on piano on two numbers. Primarily, he brings in old pals from various ...