Frank Hewitt was a fixture on the New York jazz scene since the mid-fifties. Over the years he played regularly with Cecil Payne, Howard McGhee, Charles Davis, and the late saxophone legend Clarence "C" Sharpe. He was the featured artist at Smalls for over eight years until his passing on September 5th, 2002 at age 66. He appeared in the Living Theater's landmark production of "The Connection," and played with Billie Holiday, Dinah Washington, John Coltrane, among a long list of notables. Musicians acknowledge him as a master, and the most under-recognized bebop pianist of his generation. His influences were Elmo Hope, Bud Powell, and Thelonious Monk

The chances of four people conducting a Google search on Leron Thomas that result in all four of them to make the same conclusion about the trumpeter is low. While certain facts--like his time at High School for the Performing and Visual Arts (PVA) in Houston and The New School in New York--will remain true, arguments ...

As legendary jazz vibraphonists Teddy Charles describes him, “It's not easy to be Chris Byars. With an incredible array of talents brought to bear on his composition, arrangements, and cooking jazz performances, it's no wonder he's worked his way to the forefront of the myriad of jazz players overwhelming the scene." Byars has been working hard ...

[Introduction by Teddy Charles] It's not easy to be Chris Byars. With an incredible array of talents brought to bear on his composition, arrangements, and cooking jazz performances, it's no wonder he's worked his way to the forefront of the myriad of jazz players overwhelming the scene. For me, our felicitous association led to multiple gigs ...

Fresh From the Cooler

Out of the Clear Black Sky 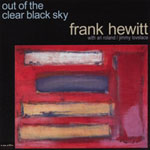 Frank Hewitt: Fresh From the Cooler

Because jazz is so fundamentally wound up in its own history, it can often be difficult for fans to accept a new voice. The canon of jazz players is set in stone--how could there be a great voice that we have overlooked? However, there come times for just such paradigm shifts. Frank Hewitt prompts us to ...

Fresh from the Cooler 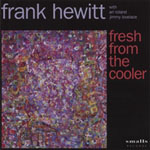 Out Of The Clear Black Sky