Filtron M is a project created by New York based keyboarder, composer and producer Manu Koch which serves as a platform for a selection of musicians and visual artists from around the globe. Manu has been exposed to numerous genres and musical cultures by working and touring with many leading figures in contemporary music for nearly two decades. Filtron M draws from this extensive experience as a sideman, ranging from Afro-Pop star Angélique Kidjo to projects by Miles Davis bassist and Santana’s musical director Benny Rietveld, collaborating on numerous True Groove productions by New York soul and blues artist Tomás Doncker or touring internationally with the New York Gypsy All-Stars. In live performances, on albums and videos Filtron M originally appeared in various units such as Astoria Roots or Unique Afrique, continues to build on those group sounds and often features guests

In a genuine international collaborative effort, with sessions recorded in New York and Zurich, Astoria Roots Live showcases the eclectic sounds of Filtron M, performing in a live setting. Launched as a musicians' collective based out of New York under the direction of pianist/composer Manu Koch, this project has expanded into Europe and integrated musicians from ...

Filtron M, led by New York-based pianist, keyboardist, and composer Manu Koch, will release their latest album entitled Astoria Roots Live (True Groove Records) on April 28, 2017. The recording is the first full-length album released by the group and was recorded live at the Iridium in New York, NY, and Moods in Zürich, Switzerland in ... 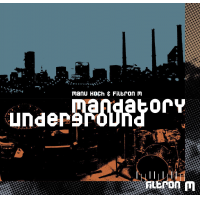