Elektra Kurtis is a violinist and composer of Greek origin, leader of Ensemble Elektra. Now a resident of New York City, she has also lived in Poland, Greece and Finland. Elektra has performed with such notable artists as Lester Bowie, Gerry Mulligan, Paquito d'Rivera, Lionel Hampton, Max Roach, Ray Barreto, Simon Shaheen and Israel “Cachao” Lopez. She has also worked with contemporary composers such as Anthony Davis, John Zorn, Henry Threadgill, Craig Harris and Butch Morris. Most recently Elektra performed as guest artist with a world music group Drum Freaks in Warsaw, Poland, recorded on NAS’s CD (2005), played in the Vision Festival in NYC in 2007 and 2009, as member of Spontaneous River improvisational string ensemble (conduction by Billy Bang 2007 and Jason Hwang 2009) and with Adam Rudolf ‘s Organic Orchestra

Bridges From The East

Elektra Kurtis: Bridges From The East

Elektra Kurtis is an incredibly talented composer and violinist; her album, Bridges from the East, celebrates the composer's Greek, Mediterranean and Southern European heritage. Her compositions are deeply personal with elements referencing different music styles and origins, both reflecting the sounds of Eastern Europe and North Africa. The European influences are by 20th Century classical composers ... 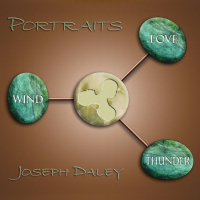 A veteran of the adventurous music scene for over four decades, tubaist and composer Joseph Daley has rarely sought the spotlight for himself, but he has left his indelible mark on all projects with which he was involved. Daley, who spent most of his professional life as an educator, is the consummate artist as he balances ...