Elektra Kurtis is a violinist and composer of Greek origin, leader of Ensemble Elektra. Now a resident of New York City, she has also lived in Poland, Greece and Finland. Elektra has performed with such notable artists as Lester Bowie, Gerry Mulligan, Paquito d'Rivera, Lionel Hampton, Max Roach, Ray Barreto, Simon Shaheen and Israel “Cachao” Lopez. She has also worked with contemporary composers such as Anthony Davis, John Zorn, Henry Threadgill, Craig Harris and Butch Morris. Most recently Elektra performed as guest artist with a world music group Drum Freaks in Warsaw, Poland, recorded on NAS’s CD (2005), played in the Vision Festival in NYC in 2007 and 2009, as member of Spontaneous River improvisational string ensemble (conduction by Billy Bang 2007 and Jason Hwang 2009) and with Adam Rudolf ‘s Organic Orchestra. In May 2009 in Scarsdale, NY Ms. Kurtis performed works for violin and piano by Witold Lutoslawski.

Ensemble Elektra under the leadership of violinist and composer, Elektra Kurtis, consists of some of the most innovative musicians of New York City's various ethnic groups. The music genre is World Jazz. Ensemble Elektra brings a fresh perspective to jazz, blending the modern beat of New York City’s life with its leader's multi-ethnic roots. The all star musicians’ repertoire of original compositions fuses contemporary jazz, western classical, and funk with ethnic music from Greece, the Mediterranean and North Africa. Show less

Bridges From The East

From: Cutting Through
By Elektra Kurtis 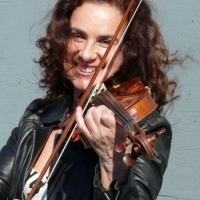 All About Jazz musician pages are maintained by musicians, publicists and trusted members like you. Interested? Tell us why you would like to improve the Sarah Manning musician page.