ARJUN, the three-piece instrumental band from New York, has been trailblazing their own hybrid of rock and improvisational jazz since 2003. Led by Eddie Arjun Peters, ARJUN fuses the power of rock with improvisational alternative jazz, resulting in a delicate balance of intricately crafted melodies backed by powerhouse musicianship. In 2013, SPACE, the first in a critically-acclaimed three-album trilogy, is a sonic dreamscape of fluid improvisations which were conceived and recorded organically. The album’s opening track, ‘Orion,’ features legendary percussionist E.J. Rodriguez (The Jazz Passengers, Sean Lennon, Medeski Martin & Wood, Marc Ribot Y Los Cubanos Postizos, D.J Logic). CORE, second in the trilogy, is a reinvention of ARJUN’s sound and style, rooted in carefully crafted melodies which tell resonant stories without words 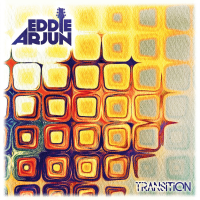 Eddie Arjun's latest album, Transition, is a cohesive body of work that showcases the confident musicianship of his trio and their solid sense of groove. Transition features Eddie Arjun on guitar, Stefano Baldasseroni on drums, and Andre Lyles on bass. Join Eddie and Lorens as they talk about the album, Queens NY, song names, Prince and ...