Bostic's distinctive style, strong on the sax and heavy on the beat, was quite successful in the rhythm and blues market in the 1950s. One of the few jazz musicians of his generation with formal training, Bostic studied composition at Xavier University in New Orleans in the early 1930s, and then spent several years performing with territory bands in the Midwest as well as with Fate Marable, who led one of the last Mississippi riverboat bands. His reputation as a superb instrumentalist earned him an invitation to come to New York City, where he played with Hot Lips Page and Lionel Hampton

Drummer Jimmy Cobb was a 91-year old NEA Jazz Master who was (until recently) still playing hard and keeping the groove with his trio consisting of Tadataka Unno on piano and Paolo Benedettini on drums. Remembering U (his 12th album as a leader and first release on his own Jimmy Cobb World label) was released in ...

Modern jazz legend Joe Lovano talks about the new COVID-19 world and so much more as we tailor our hour of jazz around his sound. We also profile the Kansas City group Guitar Elation and new material from GoGo Penguin. Dig. Playlist Joe Lovano “Seeds of Change" Trio Tapestry (ECM Records) 00:00 Host talks ...

When a jazz act takes on Jimi Hendrix, you know they do not lack for confidence. Are they experienced? They certainly are, for The NJE (Near Jazz Experience) is led by saxophonist Terry Edwards, whose many credits include Keziah Jones, Tom Waits and P J Harvey. The NJE trio tackles Hendrix's “Voodoo Child" with ...

Jazzkaar 2017 Tallinn, Estonia April 21-30, 2017 Jazzkaar covers most territories. This exceptional 10-day festival presents the best players on the indigenous Estonian scene, imports big-name acts from the USA, and also invites some choice artists from around the rest of Europe. Some shows represent jazz in mainstream mode, whilst ... 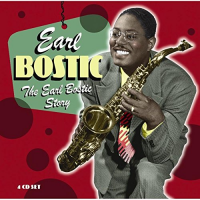 From Earl Bostic's first record date in 1939 with the Lionel Hampton Orchestra on Haven't Named It Yet , it was clear that the alto saxophonist was different. There was a sharp eagerness in his alto saxophone, a jumping swing feel at age 27 that was fresh and aggressive. He was a natural storyteller on the ...

Whisper Not Benny Golson and Jim Merod 335 Pages ISBN: 9781439913338 Temple University Press 2016 jny: Philadelphia has always been a cradle for outstanding jazz talent, though when it comes to durability surely none can match Benny Golson, who began playing seventy years ago. At 87, Golson--an NEA ...

Why the World Should Remember Wardell Gray

Part 1 | Part 2 | Part 3 [This article is a commentary to accompany All About Jazz interviews about Wardell Gray with filmmaker Abraham Ravett and biographer Richard Carter, all of which are intended to bring readers' attention to this outstanding but under-recognized tenor saxophonist whose brief career spanned the transition from swing ...