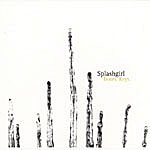 As exciting as Norway's annual Punkt Festival always is, there's inevitably one group that stands out as the sleeper hit--unexpected and lesser-known, perhaps, but delivering an especially memorable performance. Splashgirl's show was the hands-down sleeper hit of Punkt 08, and its debut disc, Doors. Keys., further bolsters its reputation as a group to watch. ...